2.Kolkata city tour by public transport - We use verious local transport like - Tram / Lunch cruise on River Ganga and public bus/ Metro Rail, Auto Rikshaw as and when require to move around the city

3.Kolkata and nearby places Photography tour

6.Art and Architectural sites of Kolkata and West Bengal

Princep Ghat:- This ghat was built in 1843 for the memory of Anglo - Indian Scholar James Prinsep This was designed by Palladian porch. This is the most popular ghat in Kolkata for Photo shoot, Cinema and music too because of the view of River Ganga and Vidyasagar Setu to connect Kolkata & Howrah district of West Bengal


Mallick Ghat:- This ghat was built by Ram Mohan Mallick (Son of Nayan Chand) in the year 1855.
This ghat is famous for the biggest wholesale Flower market of India close to Howrah Bridge.

Jaganth Ghat :- This ghat was built by Shobharam Basak in the year 1760, which made enormous wealth selling textile to the East India Company.
The ghat known for its European - style architecture and its located close to the another famous ghat (Mallick Ghat - Flower Market)

Bagbazar Ghat:- Once called ‘Rogo Mitra's Ghat,’ after Raghu Mitra, the son of Gobindram Mitra, Baghbazar Ghat is one of the cities oldest.  Gobindram Mitra called the “Black Zemindar” due to his Indian birth and dark colorings were the second Indian deputy collector. He became renowned not only for the massive amount of wealth he accumulated, but also for holding immense power within the system after he took his position as zamindar in the early days of the East India Company. The ghat later became known as Baghbazar, with a jetty next to it to carry passengers to the opposite bank of the river.


The ghat has another specific section called Mayer Ghat, which is a bathing area that was used by religious and cultural figure Ma Sharada.

Armenian Ghat - The Armenians were one of the earliest foreign settlers who came to Calcutta, a port city back in the day. This particular ghat was built by one of these Armenian settlers, a famous Calcutta trader by the name of Manvel Hazaar Maliyan in 1734. Since then it has been known as the Armenian Ghat. The ghat is renowned for its beautifully designed iron structure, which exudes grace and is a great place to visit in the city. There are also a few ferries that take can take you across the river to Howrah every hour or so. The open area amphitheatre where wrestlers practiced kusti (wrestling) in the early mornings is still a popular spot in to visit.

Baboo Ghat :-Baboo ghat is one of the oldest river ghats in Kolkata. It is named after Babu Raj Chandra Das, a zamindar and a rich man during the colonial times. In fact, this ghat was built in the memory of Babu Raj Chandra Das by his wife Rani Rasmoni. Since it was during the colonial times, the entrance to the ghat has been built in Doric-Greek architecture. Today, Baboo Ghat is totally crowded with vendors and passengers crossing the Hooghly River to reach the Howrah station.

Outram Ghat- Outram Ghat, built in the late 19th Century is dedicated to Sir James Outram. Sir James was a foot soldier in the British East India Company, but rose through ranks to become a general. During the colonial era, the ghat saw many ships sailing to East Bengal and Burma, and acted as an important port. It is located to the south of Babughat, and today sports many street food spots that are extremely popular. The proximity to places like Victoria Memorial, Maidan, Millennium Park and Race Course make it a perfect place to visit if you are sightseeing.

Chandpal Ghat-Named after a small shopkeeper of the ghat, Chandpal Ghat was once the busiest ferry ghat of Calcutta. Until the railways became the most proliferate medium of transport in the country, the ghat was used extensively. Sir Philip Francis and his fellow Councilors of the Supreme Council of India under the East India Company, disembarked here in 1774, making it a place of importance in the Colonial era. Even Lord Cornwallis, the first Governor General of India, landed here at on September 12, 1786. As the prominence of Calcutta rose, as a trading post, so did the buzz and activity at this ghat. There is still a ferry service from Chandpal Ghat, with two active jetties, one to Howrah and the other to Ramkrishnapur and Shibpur.


The Shaheed Minar or the Martyrs' Monument, formerly known as the Ochterlony Monument was erected in 1828 in memory of Major-General Sir David Ochterlony. Ochterlony was the commander of the British East India Company, and the minar commemorates his successful defense of Delhi against the Marathas in 1804, as well as victory of the East India Company’s armed forces over the Gurkhas in the Anglo-Nepalese War under him. The monument was designed by JP Parker, and was rededicated to the memory of the martyrs of the Indian freedom movement and renamed the "Shaheed Minar" on August 9, 1969. Shaheed meaning, the martyrs in both Bengali and Hindi. Today, the tower is illuminated at evening with gorgeous lights, and but visitors are not allowed to go to the top.

Kumortuli tour @ Kolkata
Kumartuli is a famous locality in Kolkata, known for its traditional potters' quarters. Since the year 1950, the locality has been in the business of sculpting high quality idols of Hindu deities. It is home to several talented potters who toil tirelessly to create clay idols. 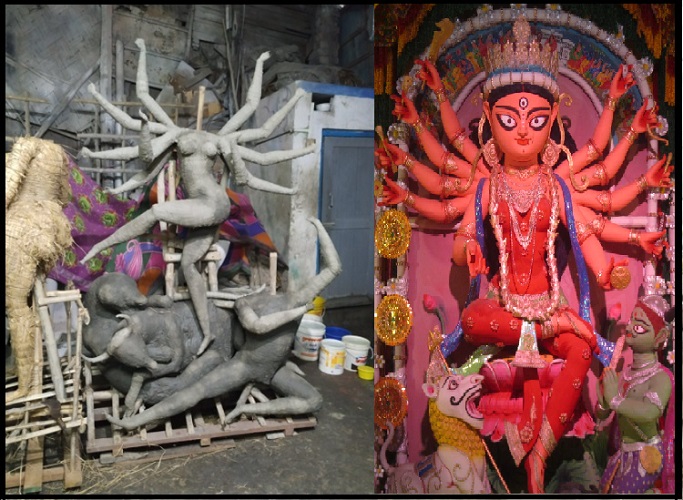 How to make Durga Idols ?
The artisans start by making a bamboo frame for the idol, called a kathamo. They bind straw over it to give it structure, and then apply clay on top to give it its final shape. After drying the statue in the sun for a few days, they paint and decorate it

Temple Tour:-Birla Temple, Thantania Kali Bari, Chinese Kali Temple at Matheswartala Road of Tangra,where they distribute Chowmin as prashad. Kalighat - Kali Temple,Pareshnath Temple,Dhakineshwar Temple and Belur Math. Its a full day tour specially design for the NRI's and foreign national to visit the most Important Temples and Shakti peeth in Kolkata and West Bengal.We also arrange the evening Lighting show at Belurmath or Dhakhineshwar as per convenience.


One day Church tour of Kolkata

Visit Kolkata with us for Customized Tour packages we provide the following services :-

2. Tour guide at Kolkata in English & other foreign language.

Digha, Shankarpur, Tajpur & Mandarmoni- are most popular sea beaches for resident of Bengal,very well connected by Train & bus . You may also reach this place by your own car by 4 hrs drive from Kolkata.

Digha is only 187 Kms from Kolkata by Road , & very well connected by train from Howrah Station with convenient timings for all types of tourists. At Digha you will find hotels from budgeted class to Luxury Hotels with all modern facilities.

Local sight seeing places from Digha - Udaypur Beach, Amarabati Park & other three nearby beaches of Bay of Bengal Shankarpur, Tajpur & Mandarmoni, although Mondarmoni is slightly far away from Digha, but local transports are available to visit all these places.

Shankarpur - is just 5 kms from Chaulkhola on Digha Kanthi high way, Less crowded beach then Digha to enjoy with your family. Good quality hotels are also available for overnight stay.

Tajpur - is also well connected from Digha or one can reach directly by road/ Train from Kolkata via Contai. Tajpur is still unexplored beach of Bay of Bengal , one can enjoy a lot as it's less crowded & plenty of food outlets are available on the beach to enjoy the perfect beach side weekend holidays near Kolkata.

Mondarmoni - It's only 180 kms from Kolkata by road & by train you have to get down at Contai & then go by local transport via chaulkhola which is 14 kms only.13 kms long motor able beach, plenty of water sports equipment available to have fun on the beach

weekend tour and Off beat Places